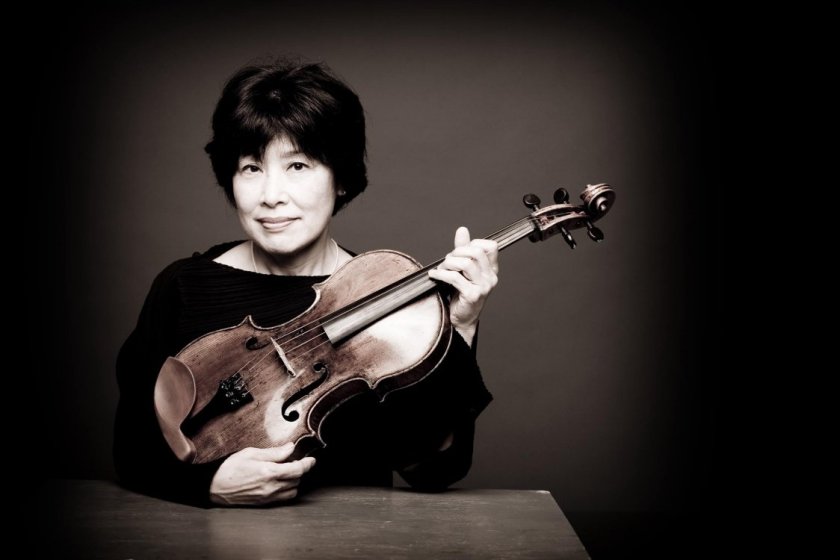 With her exceptional talent, musical integrity, and charisma, Nobuko Imai is considered to be one of the most outstanding violist of our time. After finishing her studies at the Toho School of Music, Yale University and the Juilliard School, she won the highest prizes at both the prestigious international competition in  Munich and Geneva.

Formerly a member of the esteemed Vermeer Quartet, Ms. Imai combines a distinguished international solo career with various teaching commitments. She has appeared with numerous wolrd’s prestigious orchestras including the Berlin Philharmonic, the Royal Concertgebouw, the London Symphony, and the Chicago Symphony. As a keen chmaber musician, Ms. Imai has performed with various prominent artists such as Gidon Kremer, Midori, Isaac Stern, Mischa Maisky, and Martha Argerich. In 2003, she formed the Michelangelo Quartet. The quartet gained the international reputation quickly and now became one of finest quartets in the world. Ms. Imai has dedicated a large part of her artistic activities to explore the diverse potential of the viola.

She returns to Japan several times a year, to perform as soloist and notably for the annual “Viola Space” project. In 1995/1996 Nobuko Imai was artistic director of three Hindemith Festivals at the Wigmore Hall in London, at Columbia University in New York and at the Casals Hall in Tokyo. In 2009 she founded The Tokyo International Viola Competition, the first international competition in Japan exclusively for viola. An impressive discography of over 40 CDs shows her recordings for BIS, Chandos, Hyperion, Philips, Sony among others. Ms. Imai taught as a Professor at the Detmold Academy of Music from 1983 to 2003 and at the Geneva University of Music from 2003 to June 2014. She currently teaches at Amsterdam Conservatory, Kronberg International Academy, and Ueno Gakuen University in Tokyo.

What was the first piece by Schoenberg that you’d ever heard?

I believe it was Verklärte Nacht (Op. 4).

What was you impression of it?

I played Verklärte Nacht when I was studying at Toho. I was 18 or 19 and I played the second violin part in the version for string orchestra. We practised it the whole year and almost memorised the whole piece. Mr. Saito was coaching us for every part, in front of everybody. So we could follow all the parts, even the second cello part, and understand how they functioned in the piece. He worked in a very structured way and in detail. That process made me think about Schoenberg.

It was easy to get into the piece, because the language of Schoenberg’s music is romantic and it’s more like a song. That was the first time I played it and I continue to play the piece to this day. Another piece is the String Trio (Op. 45). I learned it at Marlboro and spent the whole summer working on it. Because I was not there for the full seven weeks but only three or four, we didn’t get to perform it. But I performed it eventually in Austria with Gerhard Schultz, the second violinist of the Alban Berg Quartet. That piece is quite a bit more difficult than Verklärte Nacht.

Did you learn the trio as a junior participant at Malboro?

No, when I went there as a senior. I think the hardest part in that piece is the first 15 bars. It’s very complicated. After that, though, it becomes quite comfortable and in a romantic style. I think one has to really sing it out, since it’s a long piece. Even when you play his first three string quartets, that’s probably a valid way of approaching his music.

Have you played the quartets?

No. I’d love to play them, but you really need the time to learn it with colleagues, which you don’t usually have.

What do you think he was like as a person?

As a person? I have no clue!

What do you think is a good way of introducing his music to the audience today?

Maybe you have to explain how the piece is built beforehand, because it’s so intelligently constructed that you can’t hear certain things. You might, but the audience can’t. It’s a pity, I think one should understand by listening only.

But didn’t he sometimes composed his music in this way intentionally, so that only those who can understand would listen to it?

I think that’s ridiculous! That says something about his charactered then, too self-centered But I love the Verklärte Nacht. I you learn it when you’re really young and you play it for a whole year, it really stays with you. This is also true of its language, though the tonality is not always so clear. You have to deal with the emotions. The whole piece is like an big arch, stretching all the way to the end. That, I understand.